We are heading into winter here. Days are getting short and rain and cold winds reign the streets of Amsterdam. Beer lovers don’t need to be too upset though, as they have a good choice of local breweries that are worth a visit.

“Amsterdam lies somewhere between the US, Belgium and Germany – big beer producing countries. Their beer traditions meet here”, says Annette Wiesman. Wiesman, a Dutch journalist, is the author of the book “Jong bier in oude vaten” (Young beer in old vessels). Once she starts talking about beers, Annette is a waterfall of words. “The most traditional beer producing countries see the least need for change. You’ll find more innovations and cross overs in countries that don’t have a long tradition in brewing speciality beer, such as the US, Italy and the Netherlands. Take for instance the trend of combining yeast from Belgium with three types of strong American aromatic hop flowers, like the Flying Dog brewery does in Raging Bitch – it’s one of my favourite beers.”

Annette suggested to meet at Brouwerij De Prael (Brewery The Pageantry), situated at the ancient centre of town, between the Old Church, Central Station and Damrak. For our after office hours meeting, Annette orders a Scotch Ale made by De Prael. She is curious about the a-typical use of smoked malt and weizenbier-yeast.

We’re sitting in two comfortable retro armchairs next to a brown leather couch. To our left and slightly below us, we can see the bar, covered in old white tiles, and the Dutch “klinkers” – old fashioned, brown bricks – that make the floor. To our right and beyond the glass window, we can see a huge copper boiler that’s busy brewing beer (or at least we like to think so). It’s very lively here in the evenings. At the other side of the spacious bar a baby is wailing, while on the floor below us, a group of co-workers sit around a picnic table and cheer.

De Prael uses 100% organic malt and hops, though to our surprise the “bitterballen” (deep fried ragout balls) on the menu are not organic. The waiters working this evening – all wearing black shirts with a white drop on the right breast, the logo of De Prael – are all big, sturdy men. Most of them have a background of psychological problems and received a new chance at De Prael. The brewery has a “social employment policy” and employs people who otherwise have difficulty getting a job. Through this approach, De Prael wants to contribute to society and give people a new opportunity. The philosophy of this local brewery is admirable and a good reason by itself, to pay De Prael a visit. The reason why Annette has suggested to meet here however is because of the quality of its beers and the cafe’s great beer list.

A journey from brewery to brewery developed her taste for beer

Annette wasn’t always big on beer. Up until a few years ago, she would simply order a Belgium beer because she didn’t like regular lager beers. Then a photographer suggested to make a book on beers together. “I saw a beautiful story: about craft, entrepreneurship, about the history and the present.” They started on their journey from brewery to brewery – travelling at 90 km per hour, because that’s how fast their little old Volkswagen van would go – tasting different kinds of beer along the way. It caused her to develop a taste for beer. “I used to prefer smooth beers with sweet Belgian yeasts, like La Chouffe and Carmelite. But once I worked on our beer book, I started to also like heavily malted and hopped beers that acquire taking small and pensive sips from. Now I prefer the variety – and I’m a little tired of the hop trend.”

Beer has become fashionable in the Netherlands since. Amsterdam alone counts for four or five of the bigger local microbreweries and a fast growing number of tasting rooms and bars. Their beer is mostly meant for direct use (see the info box for the various local Amsterdam breweries).

Of course, when sitting with a beer connoisseur, the big question is: what should we be drinking in Amsterdam? “Oedipus is a nice one. They dare to add surprising ingredients to their recipe, like Sichuan pepper corns, Japanese hop, galangal root, cilantro, coriander and chilli pepper. I love the names they give their beer, names such as Mannenliefde (old slang for “gay love”), Dodo and Panty. They experiment, they take you on an adventure.”

But there are more options for the beer loving conscious traveller. “Brouwerij ‘t IJ brews beers with fruity yeast and uses organic ingredients. The venue is great for sightseeing as it is situated in a mill on the waterfront. They have six regular beers, ranging from IPA to white beer, plus a varied arsenal of others. The 7 Virtues is a younger brewery and works with people that are far removed from the labor market, one I’d also recommend.”

Fortunately, Annette also has an advice for the companions of beer drinkers that would perhaps not fancy a beer. “Try Jopenbier from Haarlem, a city just West of Amsterdam. Jopen beer has a herb in it, “gruit”, which makes the beer taste a bit like a surprisingly tasty cough syrup. It’s based on an old beer recipe from the Middle Ages.”

With the outside weather, the historical location, the conscious beer tender and the variety in tastes – you really have no excuse but to go for a drink.

Next post Blog - I feel guilty living a conscious lifestyle 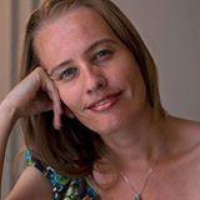 About the Author Paulien

I believe in engaged journalism. I believe in the power of a well-written story to connect lives and worlds. And I believe it is my job as a writer to make you, reader, hooked on what’s happening in the world. I use Storytelling to achieve that.

Blog – Amsterdam During the “Donkere Dagen”

Blog – Country without Orphans helps Rwandan orphans back to school