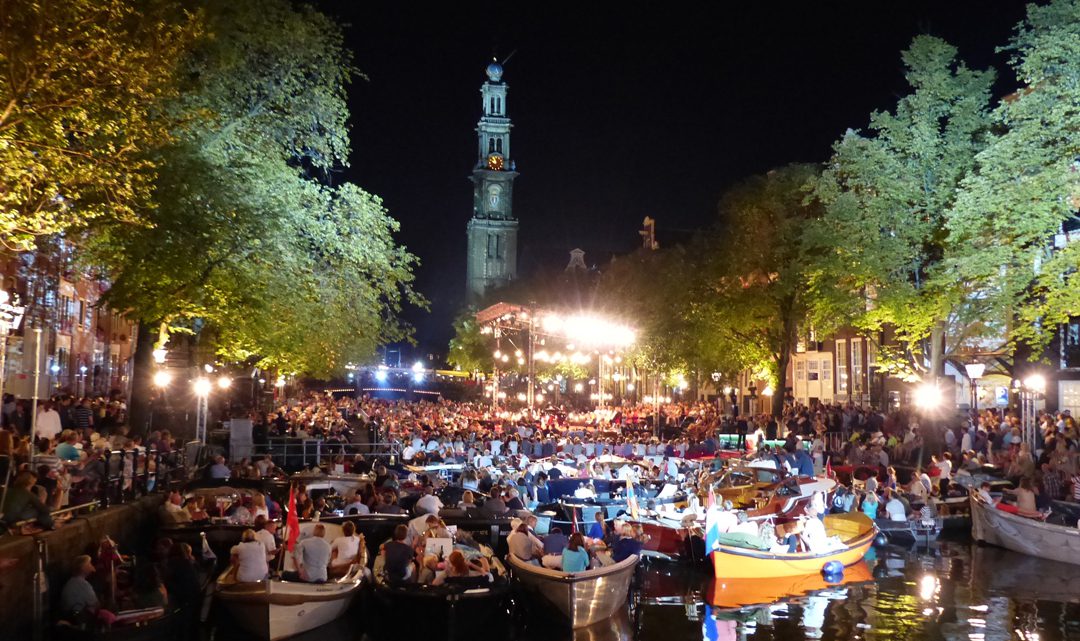 The Grachtenfestival (Canals Festival) is a unique, yearly event. In the 1 1/2 week this classical music festival goes on for,  you can get acquainted with various types of classical music. This second weekend is the closing weekend, with the festival’s absolute highlight: the Prinsengracht Concert. An enormous stage is build on the water of the Prinsengracht canal and in no time surrounded by private boats for the best views. The concert is broadcasted on National television, but watching it on television cannot match the atmosphere you experience when watching it live. Come early and take some nibbles and drinks with you, and find the best spot. Although you won’t be the only one doing so.

This Saturday, the historical and picturesque village Zaanse Schans, is the perfect backdrop for Folklore Day. As if Zaanse Schans wasn’t historically interesting enough with all the artisanal crafts and historic houses and windmills; on Folklore Day you will really be stepping back in time. Crafts markets, street theatre and music performances, clog dances and traditional costumes will create a unique atmosphere.

Read our recommendation of Zaanse Schans

This sentence from the World Cinema Amsterdam website, describes why we like this festival: “World Cinema Amsterdam will showcase the most beautiful, independent films from Latin America, Asia and Africa. Discover how life is elsewhere through the eyes of young and talented filmmakers.” We love to learn about other cultures; isn’t it through travel then film is a great alternative. It is a cinematic way of  ‘meeting the locals’. Main location for this worldly film festival is Rialto in neighbourhood De Pijp. Cultural Café De Balie is also one of the organisers offering some great films. Earlier this month the festival also had a few open air viewings in Vondelpark. And if the weather gods are kind to us, there will be some open air viewings on Marie Heinekenplein and the roof top terrace of the VU (University), later this month and next month.

Hartjesdag & Night of the Romance

Hartjesdagen is back! After a few years of absence this historic feast is back again; being it on a smaller, more manageable scale. On Sunday evening – the Night of the Romance – you can enjoy various smaller scale performances in cafes and restaurants on and around Zeedijk. There is no programme for this evening, so best is to just wander around and go with the flow. Monday starts with a brunch, strict for locals. Around 14.00 hours, the highlight of this traditional event starts: the cross dressers’ parade and competition. And the good thing is that you don’t have to do anything: just grab a drink and stand on the side of Zeedijk. The colourful and flamboyant participants will pass by…in their own pace. A whole new “people watching experience”!